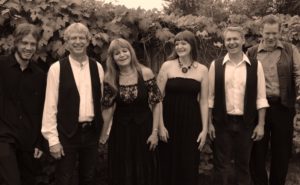 Colorado’s Greengrass band, Wild Mountain, have released a new video of one of their most popular songs, “Rain and on the Run.” If you enjoyed the song on their debut album, “Greengrass,” you’ll love it even more in this dramatic video recording. Check it out at:  https://youtu.be/4Qc_6iE3-14

Wild Mountain is a six-piece Americana folk rock band out of Colorado, mixing Celtic-Irish melodies and rhythms with American heartland Bluegrass music.  The band had its beginnings in January 2016 when after eighteen years Celtic rock band The Indulgers came to an end and multi – instrumentalist/composer Mike Nile and violinist Renee Fine found themselves looking to start a new band combining the Irish/Celtic music they had been playing with Americana/Bluegrass music.