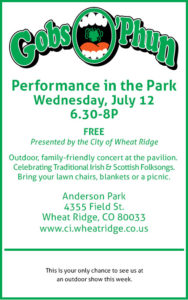 This is a free concert, presented by the City of Wheat Ridge, in this outdoor, family-friendly pavilion. The Gobs are known for celebrating traditional Irish and Scottish folk songs, so bring your lawn chairs, blankets and a picnic to best enjoy this event.

Hailing from “County Denver”, Gobs O’Phun is a traditional Irish and Scottish, acoustic folk band that originated in the family living room. Brothers-in-law Denis Sullivan and Martin Lambuth form the duet. They accompany themselves with guitar, bodhran and harmonica.

They are not an instrumental or dance band. They sing songs that tell stories. And because of the universal themes in the songs – whether it’s love, relationships, honor, pride, overcoming adversity, freedom or humorous in nature – their music appeals to all cultural backgrounds. The term “gob” is slang in the Celtic isles for your mouth, befitting a band that is more of a vocal group than instrumentalists. And when they frame their music with historical notes as well as spontaneous, humorous banter, you never know what fun will come out of their gobs!

The “Gobs” are family-friendly (or can pretend to be), tailoring their show to suit the audience. They started their public career performing in pubs, but extended that base to play festivals across the region (Colorado, Utah, Wyoming and Montana, as well as the cities of Chicago and St. Louis); public events such as the alcohol-free First Night Colorado New Years Eve and the 2002 Winter Olympics in Salt Lake City; private parties and corporate events; schools (elementary-college); senior centers, nursing homes, churches and even a convent.
As you can see, they have a wide demographic appeal.

Although many associate their music with March, the Gobs play year-round — they’re not just for St. Patrick’s Day!