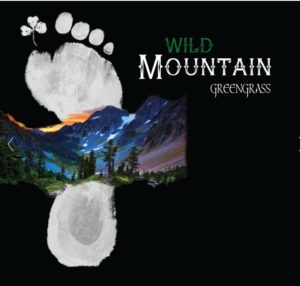 If you’ve never experienced bluegrass music with an Irish soul, here’s your chance. Wild Mountain, Colorado’s “greengrass” band, born of a fusion between Irish music and bluegrass, are making quite a splash around the Denver area, and their upcoming CD will be no different. Very nearly self-titled “Greengrass,” the album showcases the band’s versatility and musical prowess in a unique way.

The first track, “Stone Blood and Bone” establishes their credibility right away, with the virtuoso fiddling of Renee Fine, joined by the always amazing vocals of Sarah Jones. Once they’ve established the mood, the rest of the band chimes in and uplifts it in this celebration of the ups and downs of human existence.

The second song, “Like a Domino,” jumps right into the country music world with mandolin from frontman Mike Fine, joined again by Renee on fiddle, and lively banjo by David Potter. This one is a very pleasant toe tapper, expertly accompanied by Dave Sweeney on bass and John Ware on drums.

Track 3 is called “Rain and On The Run.” This song and the way they perform it speak more to the bluegrass side of the band’s repertoire, but the bluesy feel definitely has Irish roots. It’s one of those “meaning of life” songs that could apply to many situations. Well worth a listen.

With “White and Black” we hear more of the Irish background of this talented band, as Renee brings out the double stops on the fiddle, and the men join Sarah with some tight harmony. This is a nice relationship song, but still features some quality instrumental breaks. Makes you want to be someone’s “heart attack in white and black.”

It’s not just the motto of AA, “One Step at a Time” is an encouraging duet, challenging us to help each other bear the burdens of life.

“Wind Blows” is a nice ballad about love and relationships flourishing with tender care. Lots more bass and drums on this one, but it doesn’t get in the way of the flowing feel of the music.

“Midnight Run” establishes with an energetic folk-rock beat, but unlike the 1988 movie of the same title, tells a story about love that didn’t work out. If you remember “These Boots Were Made for Walkin'” or “Hit the Road Jack” you’ll get the idea, but this song has its own take on that classic theme.

With “Lucky Soul,” we get back to more of the bluegrass background of the band. We’ve had love songs and breakup songs, but this one is somewhere in between. How will this relationship turn out? Guess you’ll have to listen a few more times to find out.

Some great guitar work on “Light You Up” as we move into a more hopeful romantic mode. We seem to be exploring all aspects of love and relationships here. Have a told you yet that Mike Nile wrote all these songs? His variety is amazing.

Back to the meaning of life songs with “Trust in Fate,” though it has a relational theme too. Is life determined by outside forces, or our own choices? Listen to this song a few times and make up your mind.

Almost a sixties folk feel with the twelve-string guitar opening of “High Hope.” Still working on the struggles of human existence. I guess Mike has been feeling introspective lately. <grin>

“Dust in the Wind”? “Earth, Wind, and Fire”? No, track twelve is called “Dust Wind Smoke and Fire” (no commas), but it has all the soul of these classics, and once again, Sarah’s vocals reek of blues smoke. A very nice piece.

“That’s Why I Believe” is another song of the innocence of love, with plenty of hope for the future and the now customary quality picking, bowing, and strumming.

We finish up the album with “Because of You” and it’s a fitting conclusion to a collection of music about love, relationships, and life. Mike and Renee have been together for a long time now, and the stability of that relationship seems to inform Mike’s songwriting. Life has its ups and downs, but this album comes out overall as positive and uplifting. It’s time to add it to your collection. 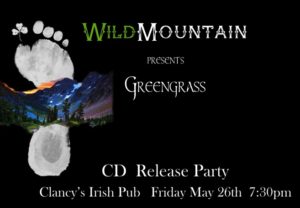 The CD will be for sale online soon, but you can get your own copy even sooner by attending the CD release party this Friday at Clancy’s Irish Pub in Wheat Ridge. This group is well worth listening to on record, but even better live, as they feed on the energy of the crowd. Check it out.

Wild Mountain is an Americana/folk-rock Bluegrass band with Irish/Celtic influences based out of Denver and Boulder, Colorado, delivering an acoustic-based Americana/Celtic/Bluegrass sound that touches a lot of stylistic bases, from folk to Celtic-Irish to American heartland Bluegrass rock music, all with captivating rhythms and melodies that excite both young and older audiences. Wild Mountain is truly a band that can be enjoyed by all ages.