Jerry Barlow in concert this Saturday 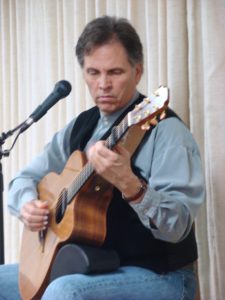 Jerry Barlow will captivate you with his outstanding mastery of the Celtic fingerstyle guitar.

Jerry Barlow will be performing this Saturday (October 15th) at the beautiful Georgetown Heritage Center in Georgetown, CO.  It’s worth the trip just to see what has been done with the restored Georgetown School Building, and check out all the cultural education going on there.  Location is 809 Taos St.

The music will be great, too.  For the first time, Jerry will be presenting selections from his just-released album, VOYAGE OF HOPE.  This is his fifth album, and he says he thinks it’s his best work so far.
The concert is to benefit the Friends of the John Tomay Memorial Library in Georgetown.  We will get things started at 7:00 and tickets are $15.00 at the door.
Acclaimed Celtic fingerstyle guitarist Jerry Barlow is a virtuoso  musician, a warm and accessible performer, and a world-class  storyteller.  His repertoire is composed of a synthesis of  traditional music from the British Isles and his own original  Celtic-inspired compositions.

Barlow’s music transports the listener across time and space on an imaginary journey to a  rustic Irish fishing village or the misty  Scottish Highlands or an enchanted English forest.  In concert,  Barlow brings the songs alive by sharing the history, legend and
humor behind the music. His expressive arrangements have been  described as “music to soothe the soul, warm the heart, and lift the spirit.”