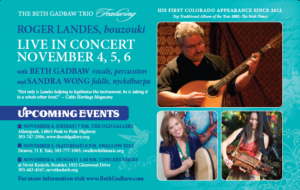 The ever talented Beth Gadbaw will be joined by some excellent musical friends in December.

Renowned bouzouki player Roger Landes will perform three shows with singer Beth Gadbaw in his first Colorado visit since 2012. Visit bethgadbaw.com to purchase tickets or to find out more about upcoming shows in Denver, Allenspark, and Boulder.

Well-deserving of accolades for Gadbaw’s singing and songwriting skills, Gadbaw’s debut solo album The Green Fields and the Mountains High is a compelling collection of traditional and original songs in English and Irish Gaelic. Some tracks, including the lively opener The Birds in the Spring, are richly accompanied by guitar, fiddle, and Gadbaw’s rhythmic bodhrán drum. Irish flute and Celtic harp also make appearances throughout the record. Other tracks, in the old Irish style known as seán nos, are sung acapella. Gadbaw’s own Thomas Watsonis a captivating guitar-driven ballad taken from the letters of her New York Irish grandmother’s great uncle, who came to Montana via Troy, New York from Ireland during the Great Famine. Another Gadbaw original, Grania’s Song, is a bold, beautifully melodic, anthem-like homage to Irish Pirate Queen Granuaile, and is accompanied only with bodhrán and hand claps.

Of ZoukFest founder and director Roger Landes, Celtic Heritage Magazine said: “Not only is Landes helping to legitimize the instrument — he is taking it to a whole other level.” Roger took up the bouzouki in 1981 and quickly set about learning Irish tunes, playing tenor banjo, mandolin, bodhran and uilleann pipes; as well as co-founding the popular Celtic band Scartaglen. When that group disbanded after a decade, he decided to concentrate on exploring the melodic capabilities of the bouzouki. His critically acclaimed CD Dragon Reels is the result of his work mastering the intricacies of Irish traditional music. Since releasing Dragon Reels in 1997, Roger has produced several recordings for other artists, performed in a duo with singer Connie Dover and recorded The Janissary Stomp, a collection of mostly original duets for two bouzoukis with folk and roots musician Chipper Thompson. In 1998 and 1999, he hosted the first international gatherings devoted to the Celtic bouzouki, “ZoukFest, ” in Weston, Missouri. Late in 1999 he relocated to Taos, New Mexico, where he maintains a busy schedule performing, producing, composing and organizing ZoukFest. Roger appeared in and contributed to the soundtrack of the 1999 film Ride with the Devil, directed by Ang Lee (Crouching Tiger, Hidden Dragon). He has appeared on the National Public Radio shows Mountain Stage and A Prairie Home Companion. In April 2001, his music was featured in a PBS documentary, Last Stand of the Tallgrass Prairie. In October 2002, Roger joined Galician piper and Chieftains alumn Carlos Nuñez in his first US tour, and in December of that year he toured in a trio with Irish fiddle phenom Frankie Gavin (De Dannan) and harmonica virtuoso Rick Epping (Pumpkinhead). In April of 2004 he had the pleasure of accompanying legendary Irish fiddler Tommy Peoples (Bothy Band) for a week of concerts during Tommy’s first visit to New Mexico.