Written on 2 October 2016   By Michael   in Celtic music, Concerts, Events 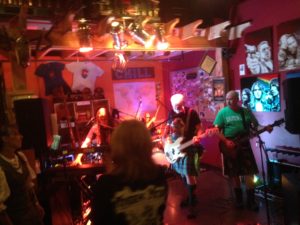 Angus Mohr broght their own brand of Highland Rock and Roll to Oktoberfest in Arvada.

Yes, that’s the way it was billed. “Irish Oktoberfest.” Hosted by Odyssey Beerwerks in Arvada, the event kicked off the month of October in style. Angus Mohr (“Highland Rock and Roll”) are always entertaining, and this night was no exception. Always fun to see people in jeans mixed with people in kilts or lederhosen.

Odyssey made a really nice Märzen beer for the event, a traditional brew made in spring and stored in cool caves until harvest time. Several patrons also spread the praises of “Clan Warrior” a strong Scotch Ale that won gold at the 2016 World Beer Cup.

Angus Mohr revitalizes traditional Celtic music’s brogue with an American blues accent while rejuvenating rock ’n roll’s broad spectrum with bagpipes and pennywhistles. No one is ever going to mistake Angus Mohr for a cover band. Sure, they play songs like “Foggy Dew,” the 1916 Easter Rising ballad, and “Whisky in the Jar,” a sixteenth century tale of love and betrayal, and their set list is peppered with songs penned by Dylan, Pink Floyd, Johnny Cash, and the Ramones. But you’ve never heard “Ring of Fire” or “I Wanna Be Sedated” until you’ve heard it with the pipes’ spiraling keen.